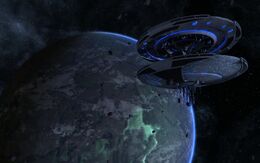 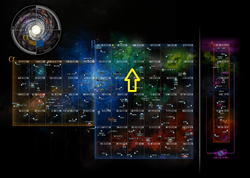 The Ra'kholh System is a system located in the Vendor Sector of the Beta Quadrant.

A Class-C world covered in a thick layer of ice, Ra'kholh was considered uninhabitable until 2391, when a group of photonic lifeforms settled on the world: The holograms run a research center in a series of domed habitats, each of which has been completely equipped with holoprojectors.

The current leader of the colony is Doctor Marius, a former Starfleet EMH Mark I who was liberated from a dilithium mine in the Sirius Sector with the help of activists from the Soong Foundation.

According to the Romulan dictionary created by Diane Duane, "Ra'kholh" is the Romulan word for "avenger".