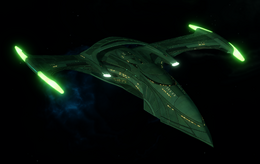 The Rahhae-class Recon Warbird is a Tier 6 Warbird which may be flown by Romulan Republic characters, as well as characters of any other faction. All faction restrictions of this starship can be removed by having a level 65 KDF character or by purchasing the Cross Faction Flying unlock from the Zen Store. This starship can be used from any level upon completion of the tutorial experience. As you level up, this ship gains additional hull, weapon slots, and console slots.

under the name Rahhae Recon Warbird [T6]. This ship can be purchased individually, or as part of the Cross Faction Recon Bundle 2 [T6] for 4,000

. It is also available as part of the following: All Faction Recon Bundle [T6] for 7,000

The Romulan Republic, lacking the resources and industrial muscle of the Federation and the Klingon Empire, is often challenged to maintain a fine balance between innovation and economic necessity when it comes to the design of new starships. Fortunately, the engineers of the Republic are up to the task, and the Rahhae Recon Warbird is their latest triumph in that arena. This new vessel brings potent scientific and intelligence gathering tech to the Republic fleet.

The Rahhae Recon Warbird provides a middle ground between the toughness of a cruiser and the maneuverability and firepower of an escort. Starship class/ROM/Rahhae

The Rahhae Recon Warbird comes with [Console - Universal - Hyper-focusing Trinary Arrays], which can be equipped on any starship:

The Rahhae-class Recon Warbird comes with an Experimental Weapon slot. This additional slot does not fit standard weapons. Unlike standard starship weapons, Experimental weapons are not affected by weapon firing modes, such as those granted by bridge officer abilities.

The Rahhae-class Recon Warbird has a battle cloak that allows the ship to cloak during combat, granting stealth and a damage bonus upon decloaking.

As a Romulan Warbird, the Rahhae-class Recon Warbird comes with built-in Singularity abilities. These abilities do not automatically rank up when acquiring higher tier Warbirds. These powers build in severity based on the charge built up by the ship's Singularity Core.

By using an [Experimental Ship Upgrade Token], the Rahhae-class Recon Warbird may be upgraded to T6-X, unlocking an extra ship device slot, universal console slot, and the ability to slot an extra starship trait.