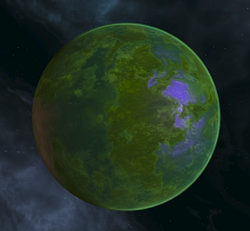 Rator III is a Romulan M-class planet in the Rator System of the Rator Sector and the capital world of the Romulan Star Empire.

In 2269, the Romulans try to capture the U.S.S. Enterprise by luring it to Rator III.

In 2387, Romulus, the Romulan homeworld, is destroyed by the Hobus supernova. Four years later, Rator III, along with Achernar Prime, was one of the leading colony worlds that recognized Taris as the Praetor of the Romulan Star Empire. In 2392, the city of Rihan is founded on Rator III, with the first constructed building housing the Romulan Colonial Organization Committee that is responsible for drafting a new constitution and restore the Empire after the Hobus disaster. The Romulan Star Empire and Romulan Senate are re-constituted two years after that.

In 2403, after 16 years in exile, Sela returns to Rator III with a large fleet and overthrows Taris, becoming the new Praetor. In 2408, Sela is proclaimed Empress of the Romulan Star Empire but disappears one year later while responding to an attack on a Tal Shiar base in the Brea System. Motivated by this new vacuum of power, Romulan and Reman fugitives striving for an eventual re-unification with the Vulcans found a new capital of a peaceful and honest Romulan Republic on New Romulus, thereby challenging Rator III's status as capital of the Romulan people.