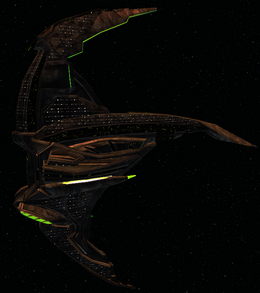 The Ravager Dreadnought (also known as the Scourge Dreadnought) is the most powerful ship in the Nausicaan fleet. Its armament is comparable to the Gorn Hegemony's Balaur Dreadnought. Like all dreadnoughts, the Ravager is slow but very durable, and defeating it generally requires several ships working together.

Like most other Nausicaan ships, the Ravager Dreadnought is vertically oriented and features two large spines extending from the main body. The aft is elongated and ends in an dolphin-like tail. The warp nacelles are directly attached to the sides of the engineering hull. Both spines have their base at the front of the Dreadnought, thus the ship has no "nose" stretching forward. While the bases stretch along the one third of the main hull's length, the spines themselves become thinner towards their tips, which stretch backwards.