A pack that can be found in the [Undine Lock Box] that gives you 7 duty officers and a bonus item. This pack was originally available from the Zen Store for 275

before being replaced by the Fleet Support Duty Officer Pack.

Explore the galaxy and find new Duty Officers for your crew! 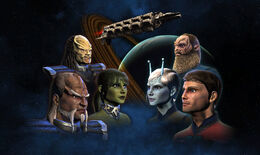 Reinforcements Duty Officer Pack can be traded, mailed, sold or purchased from the Exchange.

Right-click to Use the item.

Each Reinforcements Duty Officer Pack will include :

1. Stack of Gamma Quadrant commodities. (By chance one of the stacks listed bellow: )

2. Stack of Gamma Quadrant consumable devices. (By chance one of the stacks listed bellow: )

3. Alien Artifacts, "Powered" and "Unpowered" versions. (By chance one of the items listed bellow: )

Chances to get a "better" rarity of duty officers than a normal duty officer pack are pretty much the same, very very rare.

This item can be used by both factions, Klingon and Federation, but the received duty officers will depend on what faction you belong to.