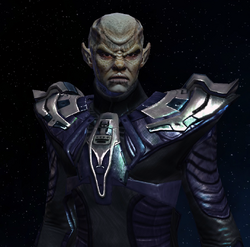 The Remans are a humanoid race originating from the planet Remus in the Romulus System, but eventually left that planet to settle on Crateris. While some remain subjects of the Romulan Star Empire, large numbers of Remans have banded together to form a separate faction - the Reman Resistance, which is based in the Vault and has since allied itself with the Romulan Republic on New Romulus.

The Remans are humanoids with a colorless, almost translucent skin. This is mostly due to the fact that they could only live on the permanently dark side of their original home world Remus. Some Remans possess telepathic powers that can be used offensively.

Little is known about the Reman culture. As a result from living under strict Romulan rule for so long, they are very skilled in mining and warfare.