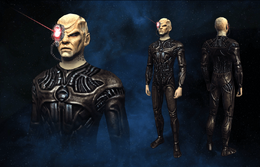 or as part of the Legacy of Romulus Starter Pack.

Players who purchased the Legacy of Romulus Starter Pack can claim this item for every Romulan character on their account. It's received as a candidate and is bound.

This officer is also available as a single-character unlock when purchased from the Zen Store. It is bound and cannot be sold on the exchange or transferred.