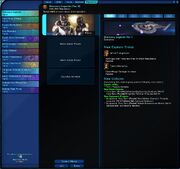 The Reputation System allows characters to progress their reputation with in-game factions such as Task Force Omega or Iconian Resistance. Each reputation includes various Sets, Traits, and other assorted gear among its tiers. It becomes available at level 50.

The system was introduced in Season Seven: New Romulus and was expanded to include a sixth tier to all reputations with Season Fifteen: Age of Discovery.

Every reputation (excluding Events) has six tiers to progress through. Each tier unlocks new traits, projects, and store items. Progressing reputations comes in the form of running the following two projects for Reputation Experience:

Every tier also needs a single 5 second project for 5 marks to finish it. Below is the total resources necessary for each tier assuming you only run the 20 hour project:

Omega Marks) for use in their reputation projects. Most reputations (excluding Events, New Romulus, and Nukara Strikeforce) also have Elite Marks (for example, [Borg Neural Processor]) which are used to acquire gear items.

Reputation can be a source of Unrefined Dilithium from the following projects:

Once the player hits Tier 5 in any given Reputation, the "Turn In Marks" window is unlocked as a source of Unrefined Dilithium:

In addition to basic Reputation Mark reward from TFOs, player can earn 55 Daily Bonus Marks for each reputation once per day. Bonus amount is equal to the number of marks required to complete a 1 Daily and 1 Hourly reputation XP project plus 10 Marks.

When a character reaches Tier V in a reputation, that reputation becomes sponsored for the entire account. Projects in a Sponsored Reputation give double the Reputation Experience, effectively halving the time and resources required to bring it to maximum tier.

Jem'Hadar Vanguard characters come pre-sponsored in all reputations released before the Gamma Task Force. Additionally, all Jem'Hadar come with two (three if Vanguard) reputations already progressed to Tier V - however, this automatic progression does not trigger the Tier V completion rewards, so progressing to Tier VI in these reputations will still require players to gather the full amount of Marks themselves. Below are the reputations which are already completed for Jem'Hadar:

Once a character obtains any reputation marks, a short optional tutorial will be offered in-game, as follows: