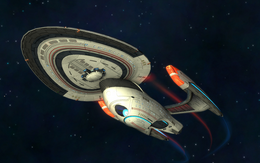 This article is about the T6 playable starship. For other uses, see Excelsior class.

The Resolute-class Advanced Heavy Cruiser is a Tier 6 Cruiser which may be flown by Starfleet characters, including Federation-aligned Romulan Republic and Dominion characters. All faction restrictions of this starship can be removed by having a level 65 KDF character or by purchasing the Cross Faction Flying unlock from the Zen Store. This starship can be used from any level upon completion of the tutorial experience. As you level up, this ship gains additional hull, weapon slots, and console slots.

The Resolute-class Advanced Heavy Cruiser bridges the gap from Battle Cruisers into Cruisers, offering good maneuverability and small ship profile in a more survivable package. Its extensive engineering department allows for excellent armor and shield hardening potential when drawing-in and absorbing enemy fire, but the decent tactical and small science departments drops this ship to more of a fire-support role when attacking.

The Advanced Heavy Cruiser finds an easy place in a team as a fast-responding tank, being able to maneuver quickly to cover a damaged teammate, while providing good supporting-fire to clear the area of "smaller" threats, so the team can focus their primary striking-power and debuffs on a "larger" threat.

This console is part of the Hot Pursuit Set, which also includes [Console - Universal - Transwarp Computer] obtainable with the Excelsior Advanced Heavy Cruiser (T3), but also equippable on the Resolute-class. Equipping both consoles unlocks a passive bonus.

By using an [Experimental Ship Upgrade Token], the Resolute-class Advanced Heavy Cruiser may be upgraded to T6-X, unlocking an extra ship device slot, universal console slot, and the ability to slot an extra starship trait.