A Respec, also known as retraining is a common term in MMORPGs indicating the partial or complete alteration of a player's skill tree. In Star Trek Online, this has been replaced with the Skill system.

With the release of Season One: Common Ground, this is possible using retraining tokens, which are available for purchase in-game, in the Zen Store, or received with each new rank achieved for paid subscription players (Gold). Additionally, each player had been granted one free retraining token when Season One was first released.

Beginning with Legacy of Romulus, Reputation and Trait respec tokens can be purchased either for 20,000

or from the Zen Store.

Retraining is performed by visiting Skill Trainers that can be found at Earth Spacedock, Deep Space K-7, Deep Space 9, First City, and Ganalda Space Station. Retraining is recommended after you purchased a new ship with abilities which requires different skills or when you want a new challenge with new weapons and/or a new gameplay style. If you intend to get a new ship and different weapons which may require a different character build, it is recommended to wait until you've got all you want, then you can spend your token.
Once you have a

Captain Retrain Token and you are at the Skill Trainer NPC, click on "Respec" menu to start to reset or modify your skills.
The Retraining interface window will pop -up and should look like this image: 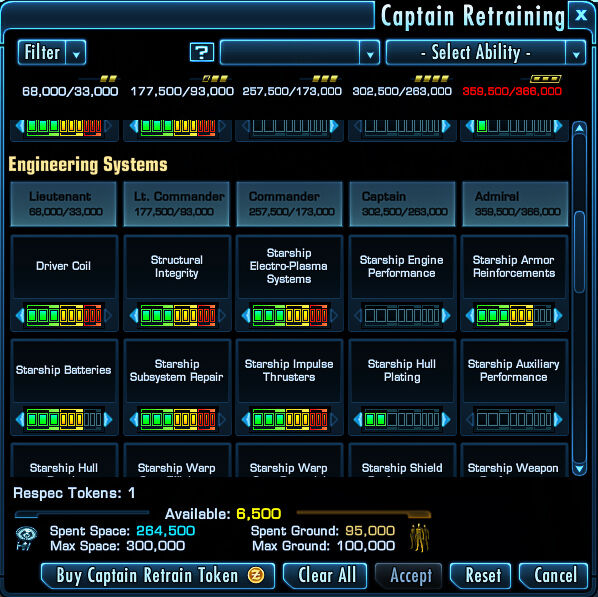 Above the skills area there are listed the 5 Ranks of your character with the minimum points required for each rank , in order to unlock the next rank.Use the small (

red) sided arrows to add or remove ranks from each skills according to your new gameplay style (ship,weapons..).

When you retrain you captain you should consider your ship/ground Set too which provides bonus abilities.Those abilities can be improved by your skillpoints too.
Example: Assimilated Borg Set provides the Ability: Autonomous Regeneration Sequencer which is modified by Skill: Starship Hull Repair
So, if you intend to use the Assimilated set for a long time, recommended is to maximize your Skill: Starship Hull Repair to get the maximum healing during combat from the bonus set.
* Also if you intend to change/wear for a long time a specific ground Kit you may wish to modify some of your ground skills too.
If the numbers are red on your character rank (as you can see on the image at the Vice-Admiral 359,500/366,000), this means you didn't spent the minimum points on that rank and you can't proceed to the next rank or you can't finish your respec and the "Accept" menu will be grayed out(inactive).
As you can see the last rank, Vice-Admiral points are calculated PER TOTAL and if you have left some points to spend , you don't have to spend them in the Vice-Admiral rank.The sided arrows of lower ranks shows that you can spend the left over points even in Lieutenant rank if you need.
Note:You can't add the minimum points in a lower rank , then later to remove them in order to spend more points on the next(upper) rank.You will get a system error window.

Buy Captain Retrain Token = opens a new window to Confirm Purchase for a token from the in game shop. (500

)
Clear All = blanks all the skills.
(If you blanked all the skills but you want to revert to your build, click "Cancel" and reopen the Retrain window.)
Reset = clear all the new points spent (revert).
Cancel = close the Retraining window from the NPC and clears your new points spent.
Accept = becomes active only when you spent your total available points.(and of course the minimum required on the last rank)

Once you have spent all your points and click on "Accept" an additional window confirmation will open up and ask the final confirmation.

Choose carefully before the last confirmation, look at your ground Kit , ship abilities/weapons and space set , you might not have the chance to reset your skills so soon.