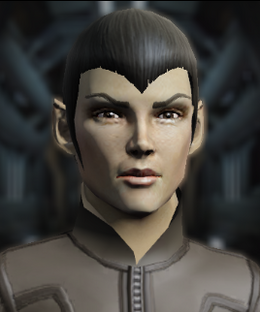 Although Rinna lost her father due to the Hobus supernova that destroyed Romulus in 2387, she, her brother Tovan, and their mother were fortunately off-world during the disaster. Rinna's mother was later killed during a Tal Shiar attack on a refugee transport. Being on their own and seeking work, the two siblings later settled in the mining colony in the Hfihar System. After Tovan met D'Vex, who invited both to settle in the farming colony on Virinat, Rinna decided to pursue her passion and became a starship pilot instead. Sometime after Tovan moved to Virinat, he lost contact with Rinna. As of 2409, he seeks means to search for his lost sister.

After leaving Virinat, Rinna served on a Romulan freighter, the Usa-ken. The crew received an offer to take a tekasite shipment to Gasko Station which turned out to be a trap set by the Tal Shiar, who came aboard, killed the ship's captain and proceeded to shoot the rest of the crew. Rinna was spared and interrogated about her brother's whereabouts. As she didn't know anything about Tovan's actions, the Tal Shiar took Rinna to their facility on Nimbus III to be used as another test subject by the Elachi.

As of 2411, Rinna has joined the A.F.S. Khitomer under Captain Kagran.