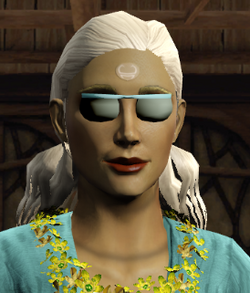 Risians are a humanoid species native to their homeworld of Risa. They are known as gracious hosts and geo-engineers who welcome all to stay on their paradise world.

Risians look similar to Humans, but have a small mark on their foreheads. It is unknown whether this marking is natural, or some sort of tattoo or implant.

The Risians are famed geo-engineers and tamed their once earthquake and rain-ridden world in the 22nd century, transforming it into a vacation hotspot. The Risians became known for both being diligent hosts, and their sexual permissiveness. The display of a fertility symbol, known as a Horga'hn, was an invitation to a sexual practice known as jamaharon. Their Lohlunat Festival ("Festival of the Moon", of which there are several in orbit of Risa) was a major festival for Risians.