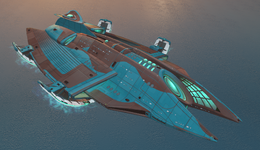 The Risian Weather Control Vessel is a Tier 6 Science Vessel which may be flown by characters of any faction. This starship can be used from any level upon completion of the tutorial experience. As you level up, this ship gains additional hull, weapon slots, and console slots.

Players can obtain this starship by claiming it from the "Events" UI after (2020) Risian Lohlunat Festival. Players who earn this ship through its associated Event may visit the “Reclaim Rewards” store, accessible via the "Events" UI, to reclaim this starship on any character on the account. The ship is currently unobtainable for those who missed the event, but may be added to Mudd's Market or the Phoenix Prize Pack in the future.

The Risian Weather Control Vessel is the result of a project that started for practical purposes, as Risa’s weather phenomena is naturally much less pleasant than the planet needs as a tourist place. However, the project has continued far past what’s strictly necessary, and this starship is the result of pushing the envelope for the sake of pushing the envelope, successfully enough that outside bidders started to take notice. Its incredible weather-control technologies are capable not only of minimizing existing weather disturbances, but also of spinning up weather-related phenomena of all kinds.

By using an [Experimental Ship Upgrade Token], the Risian Weather Control Vessel may be upgraded to T6-X, unlocking an extra ship device slot, universal console slot, and the ability to slot an extra starship trait.