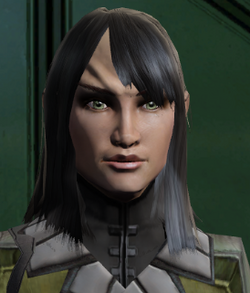 Romulans are an offspring species of the Vulcans that emigrated to the planet Romulus ca. 2000 years ago. Romulans are extremely talented at subterfuge, making their use of cloaking devices unparalleled and their damage bonus from decloaking higher than that of other species. Additionally, Romulans' Vulcan heritage is reflected in their immense physical strength, making them powerful melee combatants. After a failed coup d'état in 2379 and the destruction of Romulus in 2387, different factions formed among the surviving Romulans.

Romulan society has been secretive and xenophobic for much of its history. Romulan intellectuals thrive on deceit and subterfuge, and they favor more of a cunning approach to battle rather than sheer brute force, and this is reflected in the Romulan's long history with cloaking technology. The Romulan Republic was founded to create a more open society, but it is unclear exactly how dominant each ideology is.

Due to their shared ancestry, Vulcans and Romulans possessed very similar physiology, including pointed ears, and arched eyebrows. Unlike Vulcans, most Romulans have two brow ridges above the bridge of their nose, forming a V-shape on the forehead. However a minority of Romulans, particularly those in the 23rd century, lack these ridges; making them outwardly indistinguishable from Vulcans.

The Romulans began as a group of Vulcans who were referenced as "those who march beneath the Raptor's wings" during the violent Time of Awakening, also called "the Sundering" by the Romulans. As they kept refusing to accept the Vulcan philosopher Surak's teachings of complete suppression of emotions, they split off from Vulcan society and left the planet in the 4th century, taking with them revered artifacts like the Sword of the Raptor Star.

Traveling among the stars in huge generational ships, the outcast Vulcans created several off-shoot civlizations, e.g., the Debrune, by settling on various planets including Barradas III. Before or after this, the proto-Romulans reached Dewa III, which they named "Vastam". Some desired to settle there, not wanting to return to the cold and cramped ships, while others believed they could not make the necessary changes to live there. Eventually an open debate was organized to make the decision. Despite the good intentions, things quickly deteriorated and a massive riot began. By the time it ended, 247 people had been killed. The survivors unanimously decided to leave and ultimately settled on the planet Romulus.