All items in this set are obtained via the New Romulus branch of the Reputation System at the following tiers:

The warp cores found on Romulan Starships are based around the power of microscopic singularities. Although incredibly different at the fundamental level in terms of power generation, much of the starship systems that rely upon this exotic power source are similar the technology found in both Starfleet and Klingon technology, and can be integrated into other ships quite easily. Although this Zero-Point Energy Conduit console is custom tailored to converting the energy of singularities into EPS grids, it has also been found to be remarkably efficient at performing similar duties aboard non-Romulan starships.

Connecting this console to your ship will cause an increase in all subsystems power generation, as well as an additional resistance to energy and shield draining attacks. It also increases your chance to land a Critical Hit

The Zero-Point Energy Conduit is only available via the Reputation System after gaining Tier II status.

Item has no EC value listed on it and it does not show up in the sell tab of store. Can only be discarded.

This unique torpedo launcher fires salvos of three targetable torpedoes that deal damage to all enemies within their blast radius. High Yield salvos will consist of three heavy plasma torpedoes that, although slower, deal even greater damage as normal for high yield plasma torpedoes, while a Torpedo Spread will fire two targetable AoE torpedoes each at as many targets as possible (determined by the ability's rank).

Although the torpedoes fired are all targetable, the torpedo launcher has an extremely fast (roughly 6 second) cooldown, allowing for torpedoes to be fired almost continuously at a target, with the potential damage output far exceeding that of other torpedo launchers provided the target is unable to destroy enough of the projectiles. However, with all torpedoes fired having an area of effect, use of this torpedo launcher at close range can be dangerous to the ship that fires it, though its effects are significantly reduced by shields as normal.

The use of a [Console - Universal - Point Defense System], [Console - Universal - Torpedo Point Defense System] or [Console - Tactical - Automated Defense Turret] can potentially eliminate most or all of the projectiles launched, though the first two have long cooldown periods, and the latter may not prevent all damage. Abilities such as Beam Array: Fire at Will, Cannon: Scatter Volley or Torpedo: Spread can also be used to quickly clear plasma projectiles.

One side effect of the torpedo launcher firing in salvos of three projectiles is that a target only needs to be in the 90 degree forward arc for the launch to be triggered; the other torpedoes in the salvo will continue firing even if the target(s) have moved into another arc. Another beneficial side effect is that the destructible projectiles will usually select new targets if their original target is destroyed. This means that a torpedo spread fired against an enemy group containing fighters, destructible projectiles or weakened enemy ships can result in a larger than normal salvo striking a single target if the weaker ones are destroyed while torpedoes are in transit, or even striking another target entirely. With overlapping blasts a torpedo spread can also cause significant damage to grouped enemies held by Tractor Beams or a Gravity Well.

The Romulan Hyper-Plasma Torpedo Launcher is only available via the Reputation System after gaining Tier IV status.

Recent experiments with singularity drives have allowed micro generators to be placed directly into this weapon's subsystem, allowing it to fire with no impact to overall power levels. Using Beam Overload will still drain energy, but not as much as a standard array.

The Experimental Romulan Plasma Beam Array is only available via the Reputation System after gaining Tier V status.

For each item added after the first, an additional power is available. 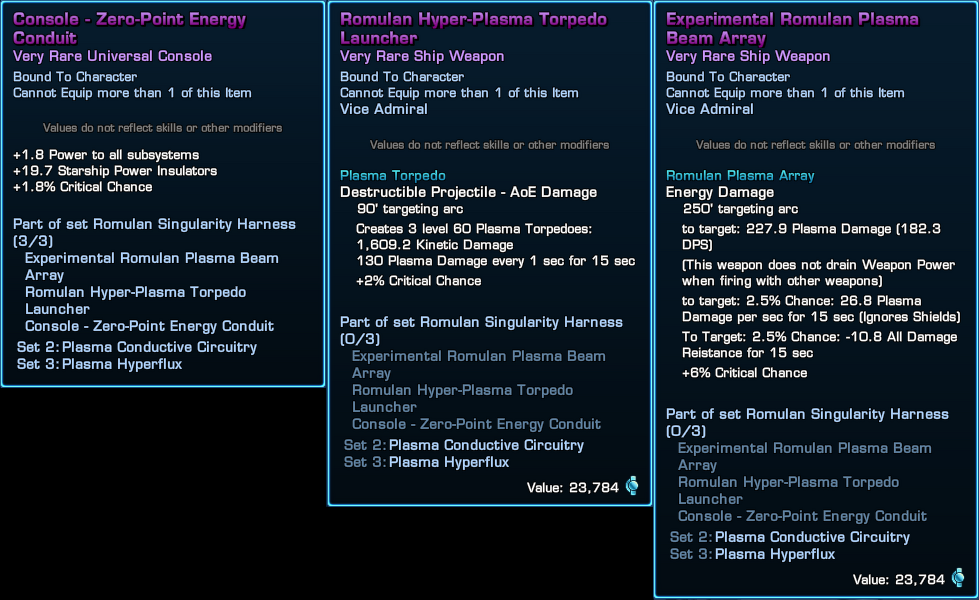