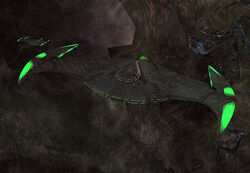 The Romulan Star Empire (or simply, the Romulan Empire) has been a major galactic power since the 22nd century and is the traditional government of the Romulan people and their subject worlds and species.

For most of recorded interstellar history, the Empire has been known for its xenophobic character and policies of extreme secrecy and territorial protectionism. The Hobus supernova of 2387, and the ensuing destruction of Romulus, threw the Empire into a great deal of turmoil, encompassing several civil wars, territorial separation, reunification and re-constitution.

Since then, a new capital was established on Rator III, where Sela eventually proclaimed herself Empress in 2408. However, after her disappearance in 2409, the status of Rator III as capital was challanged by Romulan and Reman fugitives who strive for an eventual re-unification with the Vulcans and have founded a new faction - the Romulan Republic - on New Romulus.

Romulan society is secretive and xenophobic. Romulan intellectuals thrive on deceit and subterfuge, and they favor more of a cunning approach to battle rather than sheer brute force, and this is reflected in the fact that most Romulan vessels have cloaking technology.

The military arm of the Empire is known as the Romulan Star Navy. It is overseen by the Tal Shiar.