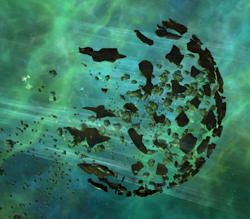 Debris after the planet's destruction

Spock on the surface prior to the supernova

In 2387, the Hobus supernova destroyed Romulus, killing its 4.2 billion inhabitants. A memorial now stands amidst the debris. While Rator III became the new capital of the re-constituted Star Empire in 2394, the Romulan Republic made New Romulus its capital in 2409, also declaring it the new homeworld of all Romulans.