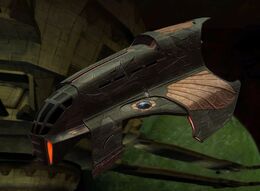 The Rozhenko-class Timeship is a Tier 1 (Level 1) Small Craft which may be flown by Klingon Defense Force characters, including Klingon Empire-aligned Romulan Republic and Dominion characters. All faction restrictions of this starship can be removed by having a level 65 KDF character or by purchasing the Cross Faction Flying unlock from the Zen Store.

. The boxed ship is not bound and so may be traded to other players or bought and sold on the Exchange for energy credits under the name [Special Requisition Pack - Timeship Shuttle]. The choice box's contents depend on the player's faction; Klingon Empire players will receive the Rozhenko Timeship when opening it.

The Rozhenko Timeship is a 29th Century Timeship recovered from the Tholian Assembly. Most of the advanced technology from these ships have been stripped, and have been replaced with contemporary equipment. Presumably named after Alexander Rozhenko, Son of Worf, who has recently funded research into temporal mechanics, the Rozhenko-class Timeship is a small craft with fantastic power.

The Rozhenko Timeship comes with a Subatomic Deflector Array. This Deflector provides a small improvement to Starship Flow Capacitors, Particle Generators, Shield Systems and Shield Emitters. The Deflector also enables you to fire a Subatomic Disruptor. This devastating weapon fires a single massive sustained beam capable of breaking apart a target's molecular structure. It can be equipped on any small craft.

The Sensor Analysis passive ability grants the player a stacking damage bonus of 3.33% per minute against a single target whilst the player maintains target lock on an enemy. Once the player switches targets the bonus is reset.

The following table compares the Rozhenko with other Klingon small craft.