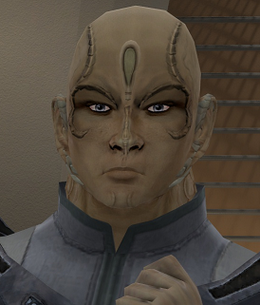 Ambassador Rugan Skyl is a male Cardassian member of the Detapa Council and representative of the Cardassian Union.

Prior to the release of Victory is Life, he was present at the Borg talks at Deep Space 9 in 2409 and other diplomatic functions. However he was replaced by Elim Garak in these appearances. He does however subsequently appear with Garak in “Storm Clouds Gather”.

Skyl had a mentor, Gul Mavek, who was stationed at Deep Space 9 during the Dominion occupation of the station. During that time, he acquired a taste for Bajoran Distilled Kanar.