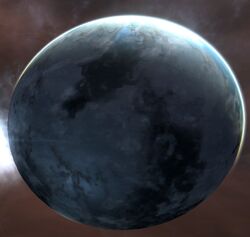 The mining prison of Rura Penthe

Rura Penthe is an icy world located in the Beta Penthe System and site of the Rura Penthe penal colony. Access to the surface is restricted, even for KDF officers.

In 2153, Starfleet captain Jonathan Archer was condemned to a life-sentence on Rura Penthe, for his role in assisting a group of refugees which had fled a Klingon protectorate. In addition, Archer's advocate was sentenced to a period of one year in the mines, for his accusation of dishonorable conduct on the part of the magistrate. Although Archer was eventually rescued by his crew, his advocate elected to stay, feeling that he could not restore honor to the Klingon justice system living as a fugitive.


In 2293, Starfleet officers James T. Kirk and Leonard McCoy were sentenced to life on Rura Penthe, after being found guilty of the assassination of Chancellor Gorkon. Both were rescued by Captain Spock and the crew of the U.S.S Enterprise-A before freezing to death on the surface.