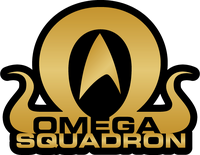 If anybody wants to join a great, casual Fleet, I've created one called The Omega Squadron. So far it's just a handful of us, but if anybody is interested, then send a /tell to Iborin@TerranRich in-game for more info!

Public profile over at STO[]

I gather this means that there's no public profile over at STO to point folks to when they ask about your character?

Looks like no one's posted over there in more than five months. Is the invite information on the page still current? — Eyes

Since TerranRich is no longer involved with STOWiki and it seems as if his Fleet Omega Squadron has gone idle too perhaps it would make sense to remove Omega Squadron and references to it from the wiki? -- BrooklynKnight 15:47, 21 August 2011 (UTC)

Agreed, let's wait for some other opinions. Also, let's discuss, if the fleet should be replaced by something new. --RachelGarrett 08:36, 22 August 2011 (UTC)

It's been a month and a half with no new discussion on this point, so I'm going to proceed with removing the Omega Squadron section at least. (The change is easily undone if anyone objects.) — Eyes

There used to be one affiliated with a number of the players here but it was a dead fleet last time I knew. We had discussed it as it was linked to on a couple of the pages but I can't find it right off. --Drmike 00:53, 18 March 2012 (UTC)

You can always go ahead and try. To be honest though, seems like most of the folks editing here have been here long enough so if they were going to be in a fleet, they would have already joined one. Most of the fleets I have looked at have been just 1 active player with no web presence. I know most of the fleet invites that I get sent, I don't have a clue as to who is sending them to me nor do I have a clue as to who the fleet is. I know I would rather join an already existing fleet with some history and at the very least a webforum or other discussion area. The other problem is that I;m partly deaf and have an issue with hearing over voice chat, something most fleets require. Chatting while in the library isn't that good of an idea either. --Drmike 19:15, 18 March 2012 (UTC)

Nameless yet trying to be famous[]

I would have to recommend against that. Most people's IPs are dynamic, and some dynamic IPs change very frequently. If you really want to add your name to the hub, I strongly recommend registering an account with the wiki first. It's completely separate from your STO account and completely free. — Eyes