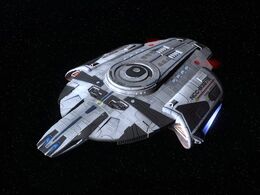 The Sao Paulo-class Tactical Escort Refit is a Tier 4 (Level 30) Escort which may be flown by Starfleet characters, including Federation-aligned Romulan Republic and Dominion characters. All faction restrictions of this starship can be removed by having a level 65 KDF character or by purchasing the Cross Faction Flying unlock from the Zen Store.

. This ship can be purchased individually, or as part of the console-only Federation Pack for 4,000

. It is also available as part of the following: console-only All Faction Mega Bundle for 8,000

The original Defiant, commanded by Captain Benjamin Sisko, was on the front lines during the Dominion War. When it was lost to the Breen at the Second Battle of Chin'toka, Starfleet assigned the U.S.S. Sao Paulo to Deep Space Nine, but gave Sisko and his crew permission to rename the ship to Defiant. Almost 35 years later Starfleet has launched the Tactical Escort Refit: Sao Paulo class in honor of that ship.

The Sao Paulo comes with [Phaser Quad Cannons [Dmg]x3]. These Quad Cannons can be equipped by any starship capable of equipping Dual Cannons, and have a base damage 3% higher than Dual Cannons (before [Dmg] modifiers), as well as an innate 15% boost to their own damage. This fearsome energy weapon draws power from the ship's engines to deal massive damage to an enemy. The Quad Phaser Cannons scale in effectiveness with you up to Mk XII, and then may be upgraded. They may also be re-engineered.