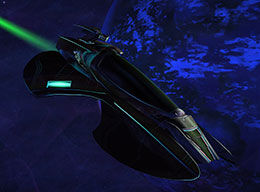 This article is about the playable starship. For the NPC vessel, see Scorpion Fighter (Mob).

The Scorpion-class Fighter is a Tier 1 (Level 1) Small Craft which may be flown by Romulan Republic characters, as well as characters of any other faction. All faction restrictions of this starship can be removed by having a level 65 KDF character or by purchasing the Cross Faction Flying unlock from the Zen Store.

Players can obtain this starship from the Zen Store for 500

. This ship can be purchased individually, or as part of the PC-only Legacy of Romulus Legacy Pack for 16,000

. It is also available as part of the following: Console-only Romulan Legacy Pack for 4,000

Initially used as support craft for the Reman Scimitar, Scorpion-class Fighters are quick and versatile ships comparable to Starfleet's Peregrine Fighter and Klingon Defense Force To'Duj Fighter. A fast small craft, the Scorpion-class has powerful offensive abilities for its size, but is less durable than Kestrel Runabout.

The Scorpion-class Fighter has a battle cloak that allows the ship to cloak during combat, granting stealth and a damage bonus upon decloaking.