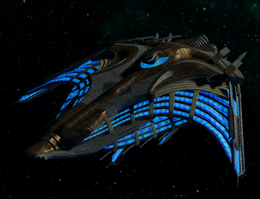 The Sech-class Strike Wing Escort is a Tier 6 Strike Wing Escort which may be flown by Klingon Defense Force characters, including Klingon Empire-aligned Romulan Republic and Dominion characters. The faction restrictions of this starship can be removed by having a level 65 KDF character or by purchasing the Cross Faction Flying unlock from the Zen Store. This starship can be used from any level upon completion of the tutorial experience. As you level up, this ship gains additional hull, weapon slots, and console slots.

. This ship can be purchased individually, or as part of the Cross Faction Strike Wing Escort Bundle [T6] for 4,000

The Sech-class Strike Wing Escort is the perfect vessel for a Klingon warrior seeking out tales of glorious conquest. A powerful vessel, if a light one, it features a battle cloaking device for optimal tactical setup, a full complement of fighters to aid in combat, and a heavy weapons layout for maximum carnage.

It features improved command capabilities, to best coordinate with its fighters or other nearby allies, and a powerful tactical & weapons suite. The Subatomic Field Disruptor causes your foe’s ship to deteriorate out from under them, and also infects foes that try to aid the vessel, demoralizing your enemy while you defeat them. Lastly, the Cascading Gravimetric Disruptions device equipped to the vessel will turn gravity itself against your foes, weakening and grouping them close to ensure that you and your fighters will be able to bring them a swift, honorable death. Starship class/KDF/Sech

The Sech-class Strike Wing Escort has a battle cloak that allows the ship to cloak during combat, granting stealth and a damage bonus upon decloaking. It has a unique cloaking effect as seen on Star Trek: Discovery.

The Sech-class Strike Wing Escort comes with an Experimental Weapon slot. This additional slot does not fit standard weapons. Unlike standard starship weapons, Experimental weapons are not affected by weapon firing modes, such as those granted by bridge officer abilities.

This starship has a single hangar bay equipped with House Mo'Kai Fighters. These fighters are equipped with Disruptor Beam Arrays, and can use Beam: Overload I.

The Advanced variant of these Fighters can be obtained from the Dilithium Store, while the Elite variant is obtainable from the Fleet Starbase with unlocked Tier V Communications Array.

By using an [Experimental Ship Upgrade Token], the Sech-class Strike Wing Escort may be upgraded to T6-X, unlocking an extra ship device slot, universal console slot, and the ability to slot an extra starship trait.