Sector space is an overview map containing all accessible sectors within a quadrant of the Milky Way Galaxy. Travel via sector space represents the starship at warp, and the desired destination can either be reached by selecting it from a list in the map menu, clicking it on the overview map, or by manually steering toward it.

The Milky Way is divided between four "quadrants" of equal size; 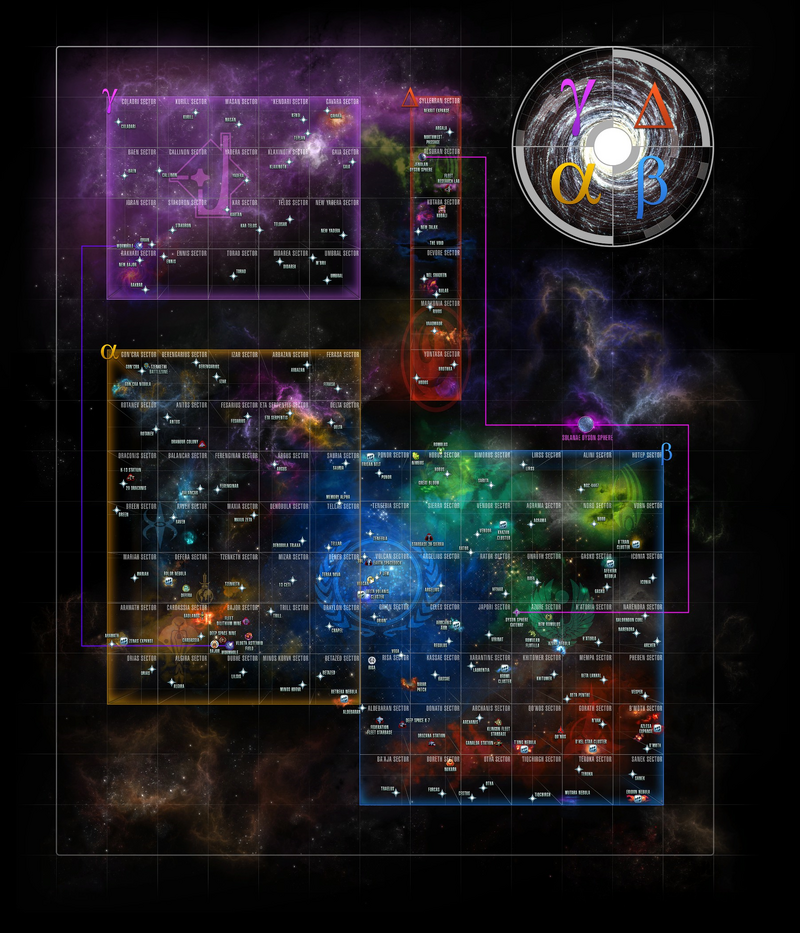 The primary role of sector space is to access star systems, starbases and other specific areas of space. These entry points allow access to persistent player hubs, such as Deep Space Nine, official missions and PvE queues.

Upon entering an area of sector space for the first time (usually blocks of three sectors), players achieve an accolade and a short text about that area of space is narrated by one of several actors of Star Trek fame:

Various Red Alert missions are available in sector space, such as Tholian Red Alert, which when accepted will trigger a space queue event. There are also Deep Space Encounters with small groups of enemies, which can be entered by up to five players.

In the early game, enemy ships in sector space would chase your ship if you were nearby. If they caught up to your ship it would trigger a combat map between your ship and the enemy NPC that caught you. This was removed due to it becoming irritating while navigating sector space.

The player's location within sector space determines which Duty Officer assignments are available. This system still uses a version of sector blocks to decide what is shown on the "current map" screen; for example one set of assignments shows across the old Sirius Sector Block, regardless of what sector you are in.

In addition to the current map assignments, Duty Officer Assignment Nodes, represented by nebulae or star clusters, give access to special assignments. They mostly pertain to colonization efforts.

At random points around sector space the player can encounter "Unknown Nebulas", "Unknown Comets", or "Abandoned Ships". They are randomly spawning scanning nodes which grant the player Research and Development Materials.

To access functions such as bank and mail, each faction gains a comm ability early on in the game to call a freighter; the Azura II, the Vov'wI or the Suliban Cell Ship. Calling these allows the player and anyone near to the called ship to access bank, mail and exchange functions in sector space.

There are also a number of Ferengi traders in sector space which the player can buy commodities from.

Starships travelling through sector space travel at Warp speed, which is determined mainly by the power of the ship's Warp Core but can also be augmented by other means. After level 50, captains can also access Slipstream which allows their ship to travel much faster than normal warp speeds for a short time.

Alternatively, players can fast travel using transwarp. This comes in one of three guises;

Players can view their current map on the minimap, shown in the top right of their screen. They can then enlarge this area and galaxy maps, as well as the systems list. Selecting a system from the area (sector space) map or the systems list will auto-travel their ship to that point. Auto-travel does not work on other maps.

At launch, sector space was divided into a handful of Sector blocks spread out across the Alpha and Beta Quadrants. They typically contained between 2 and 4 sectors with the exception of the Pelia Sector which existed independently. Exploration clusters branched off of the sector blocks at various points.

They blocks were positioned on the galaxy map to show empty spaces between some blocks, indicating the travel from the Beta to the Alpha quadrants crossed unplayable sector space. Likewise the Orellius Sector Block was shown as divorced from the main group of Alpha Quadrant sector blocks. Meanwhile, the Gamma Orionis block was implied to be a greater distance away and were accessible only by Transwarp Conduits located in Federation and Klingon space.

Due to faction divisions, Federation and Federation-allied Romulan players were not permitted to enter the Omega Leonis block which contained Qo'noS while Klingon and Klingon-allied Romulan players could not enter the Sirius block. As travel between the Alpha and Beta quadrants went through Sirius, this necessitated a link from the Eta Eridani block to the Orellius block. It also meant the Risa event led to special dispensation for Klingons to travel direct to Risa.

Reaching rank 4 in diplomacy or marauding unlocked the ability for players to access the restricted blocks, and to confer temporary permission on another player. 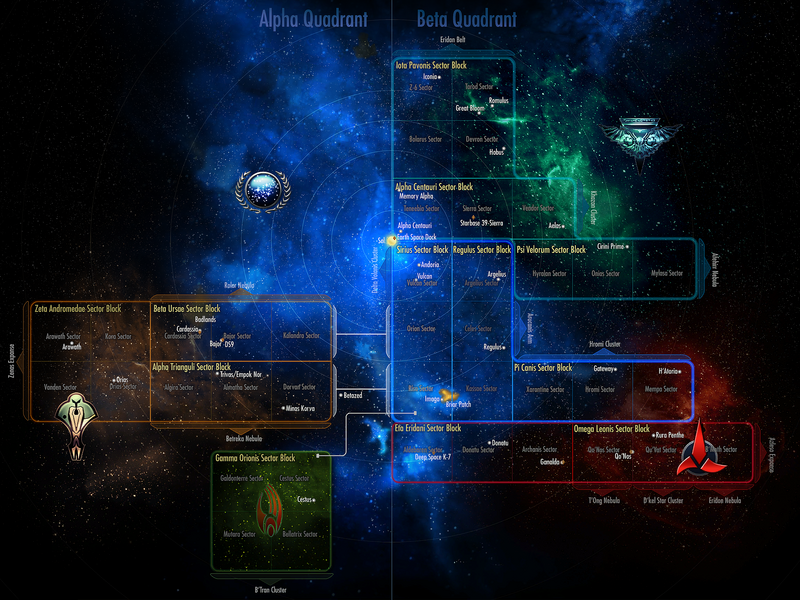 With Season 2, the Pelia Sector and the Orellius Block were added to give players access to Fluidic space, as part of the Undine Front storyline, and the Deferi space as part of the Breen storyline and the Borg invasion of Defera.

Season 3 introduced a major graphical revamp to sector space and allowed the astrometrics mode to be turned off or on as desired, so in the former case sector borders would not be seen until in close proximity. Stars would also "twinkle" until a few light years away from the ship, where the system's planets would become visible.

With Season 7 introducing the New Romulus storyline ahead of the new Romulan faction, the Tau Dewa sector block was added with the Azure Sector, the Nimbus Sector and the Narendra Sector. Because the Hromi Cluster exploration cluster previously occupied some of the space, it was changed to an interactable system on the border of the new block.

With Season 9.5, all other exploration clusters were entirely removed from the game. The duty officer assignments remained at nodes in the style of the Hromi Cluster.

In Season 10, sector space was again given a major overhaul with the sector blocks being merged into the Alpha, Beta, and Delta Quadrants.

To celebrate the falling of the sector block walls, players were gifted with emotes and badges referencing the episode Darmok.

The Agents Of Yesterday expansion added a new sector space in the form of 9 sectors of the Beta Quadrant in the 23rd Century. It is only accessible to TOS Starfleet players prior to playing “The Battle of Caleb IV”. If the player attempted to cross the Romulan Neutral Zone, their bridge officer would inform them that they did not have permission to enter. The map style was taken from the episode Balance of Terror.

Season 12 expanded the Alpha Quadrant towards the galactic center to include areas such as the Sauria Sector and the Fesarius Sector, the latter of which is the focus of First Federation space and is blocked to players. The change also moved some existing systems to make use of the extra space, such as relocating the Ferenginar Sector.

Victory is Life brought in the Gamma Quadrant to the game (previously only accessible by the mission “Operation Gamma”) both for endgame missions and also as the home quadrant of Jem'Hadar characters. The quadrant also serves as a sector space battlezone.

The Age of Discovery expansion added a new sector space in the form of 4 sectors of the Beta Quadrant in the 2250s. It is only accessible to DSC Starfleet players prior to playing “Downfall”.