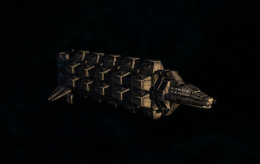 Sela's Armed Freighter is a Romulan freighter commanded by Empress Sela following her escape from Romulan Republic captivity in 2410. Despite its modest appearance, it has been extensively modified, with upgraded weapons, shields, engines, and subsystems. It is capable of masking its energy signature across long distances.