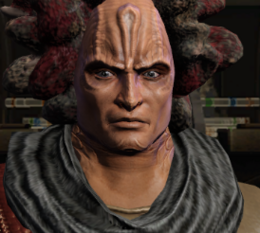 Sessen is a male hybrid Kazon/Cardassian, and First Maje of the Kazon-Nistrim.

In 2372, Sessen was conceived by his parents Seska and Jal Culluh. After birth, he was instrumental to the Kazon when they seized the Starfleet vessel U.S.S. Voyager. Voyager's crew was stranded on a primative planet for the exception of the ship's EMH and a criminal crewman. In the battle to retake the ship, Seska was killed and Culluh took the child with him when he fled.

By 2410, Sessen has grown up and taken over his father's role as First Maje of the Kazon-Nistrim. He harbors a deep vendetta against Voyager and her crew, blaming them for his mother's death.