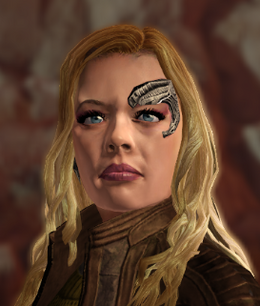 Seven of Nine (human name Annika Hansen), is a human former Borg drone, a prominent Federation researcher and member of the Fenris Rangers.

Annika Hansen was born in 2350 on Tandara colony. Her parents, Magnus and Erin Hansen, were Federation scientists who studied the Borg, long before first contact with them was officially established. In 2353 Annika Hansen accompanied her parents on one of their research missions. Three years into the mission, the Hansens were discovered and assimilated by the Collective. Annika became a Borg drone with the full designation Seven of Nine, Tertiary Adjunct of Unimatrix 01.

In 2374, Seven of Nine was utilized as a liaison between the Borg Collective and the crew of the U.S.S. Voyager when Kathryn Janeway offered a truce to address the larger threat of Species 8472. When the alliance broke down, the crew of Voyager cut Seven's link to the Collective. Over the following years, Seven would regain her identity and become a valuable member of Voyager's crew. In 2376 Seven's curiosity on an away mission lead to the reawakening of the Vaadwaur after 900 years in stasis. In 2378 Seven returned to Earth with the crew of Voyager.

In 2381, Seven was approached by Captain Jean-Luc Picard to join a task force against a renewed Borg threat. Seven was tasked with researching the technology brought back by Voyager from the Delta Quadrant. In 2385, Seven severed all her ties with Starfleet, in protest of the admiralty's decision of disbanding the Borg task force. Subsequently, Seven joined the Daystrom Institute. By 2399, Seven had joined the Fenris Rangers, a group of vigilantes operating in the now-defunct Romulan Neutral Zone in the Beta Quadrant with the aim of restoring order in the region following the destruction of the Romulan homeworld and the subsequent collapse of the Romulan Star Empire.

By 2410, Seven, at the request of Rear Admiral Tuvok, had joined Starfleet's efforts to explore the newly-accessible Delta Quadrant, joining a research team aboard the U.S.S. Callisto. Seven remained in regular contact with Kathryn Janeway, who had helped her regain her individuality during their shared time on Voyager.