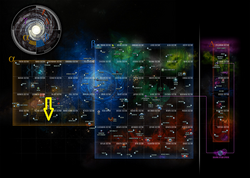 The Shahr System is a system located in the Dubhe Sector of the Alpha Quadrant.

Gul Madred acquired mineral rights to several systems in the early days after the Dominion War, including the Shahr system. When the Cardassian military was decommissioned in the Federation-Cardassian treaty of 2386, Madred hired hundreds of former officers to supervise his mining operations. Starfleet Intelligence now believes that Madred's mining operations were a cover for the formation of the True Way.