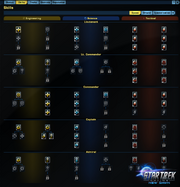 Being comparable to talents and talent trees of other MMORPGs, Skills improve existing abilities and/or grant passive bonuses by spending points on them. Skills have a direct influence on the overall strengths of your character and your bridge officers' space abilities, and, along with your traits and Captain Specializations, are a key to adapting your character to your play style. Additionally, purchasing a certain number of skills in a specific space unlock path (out of the three), along with ground skills, will also unlock the option to craft new Training Manuals for your Bridge Officers, granting them higher ranks of abilities.

Skills are separated into space and ground skills. Space skills are divided into "Tactical", "Engineering", and "Science" unlock paths. Additionally, there are five rank tiers of space skills, from Lieutenant displayed at the top of the skill window, to Admiral at the bottom. While space points can if desired be immediately spent on skills as they are earned via gameplay, you must hold the required player rank in order to spend them within the equivalent rank tier of the space skill tree. Ground skills consist of only one group and have no rank restriction. Alternatively it is possible to accumulate points and spend them once a higher rank is reached, as acquired skill points never expire.

There are a total of 90 Space Skills, 30 for each column unlock path of "Engineering", "Science" and "Tactical". Players receive a Space Point every level up to a total of 46, with the first point gained at level 5.

There are a total of 20 Ground Skills. Players receive a Ground Point every 5 levels up to a total of 10, with the first point gained at level 5.

Each Engineering, Science, Tactical, or Ground skill purchased also advances an unlock path for that specific track. Nodes along this unlock path allow players to choose from one of two performance boosts. Unlock paths also unlock the ability to craft specific bridge officer training manuals, or choose from two manual choices in the case of ground skills.

Investing 24 points into a single space unlock path of either "Engineering", "Science" or "Tactical" unlocks a powerful active space ability for that path. Up to 3 additional points can be invested into the same unlock path to acquire up to three "Enhancers" for this ability to make it even more powerful. Each of these abilities needs to be activated manually and will be effective for 15 seconds, with 1 minute 30 seconds recharge.

Since a player can have a maximum of 46 space points and an ability costs at least 24 space points to unlock, hence at most a single ability can be available to a player at any given time. Retraining of skills would be required if unlocking of a different ability is desired.

(Note: Will temporarily override your normal critical hit chance, including the displayed amount, while active . Does not stack with Particle Manipulator)

Focused Frenzy
- 1 min 30 sec recharge
- Affecting skills: ? (if any)
- +8% firing cycle Haste when damaging marked foe, up to 5 stacks
- Stacks expire after not hitting the target for 2.5 seconds

Once a character reaches level 5, a short optional tutorial will be offered in-game, as follows: