You may be looking for Carrier Pets, the deployable AI crafts from Carriers, Escort Carriers and Flight-Deck Cruisers.

Small Craft are playable starships such as shuttlecraft and fighters. Compared to full-sized starships, they have significantly less hull, shields, weapons, bridge officers, consoles, and crew. However, these craft have very high maneuverability and turn rate and can come equipped with specialized weapons that have a full 360 degree firing arc. Fighters are a subset of small craft that are capable of equipping Dual Cannons.

Small Craft are automatically used, when a mission requiring the player to be in such a vessel is launched. Alternatively, it is possible to always fly your small craft by selecting it as your "active" ship. This can be done at two locations:

To see which rank and profession of Bridge Officers you can have, hover your mouse over the icons in the Bridge Officer column of the table. The values in the shield column show the capacity of the shield that ship has equipped as standard. See the shields guide for more details.

The table below gives example hulls for Shuttles with a hull modifier of 0.5, 0.55 and 0.6, representing for example a Class F Shuttle, Peregrine Fighter and Delta Class Shuttle, respectively.

An elite upgraded shuttle, used for short-range missions, Type-7 shuttlecrafts were in limited circulation in the mid-24th century, appearing on a moderate number of starbases and starships, including the Galaxy-class U.S.S. Enterprise-D.

Standard Shuttlecraft fitted on most Starfleet vessels, the Type-8 is mainly used for transportation of personnel. It is capable of performing other tasks as well in dire needs.

Fitted as standard on Defiant-class vessels and other ships of a similar size, the Type-10 performs many of the tasks as the Type-8 does; for it is mainly used for transportation of personnel. Its smaller size, however, limits its capability.

What was standard for Starfleet vessels in the 2260s, the Class-F is an earlier incarnation of the Type-8 shuttle and other similar such Shuttlecraft such as the Danube Class Runabout.

Commonly known as the Type C, this Federation Shuttlecraft was in use through the 2250s.

Its design is based on the Delta Flyer, a craft designed and built by the crew of the U.S.S. Voyager during their sojourn in the Delta Quadrant. It is larger than standard Federation auxiliary craft and has more advanced shields, allowing for longer and more hazardous away missions. It also gains a 10% bonus to shield strength compared to other shuttles (60% versus the standard 50%).

Designed in conjuncture with the D'Kyr Science Vessel and being one of the more advanced small crafts available, it comes with 2 Ensign abilities (both Science), as well as Sensor Analysis and SIF Transfer, for a grand total of 4 base abilities, more so than any Small Craft. As a result, it more for support of larger starships in dangerous situations.

The Aeon Timeships appear to be the same class as the Federation Timeship encountered by Captain Kathryn Janeway in 2373 and appears to have only become available after it drifted through the Azure Nebula spacial rift. The Aeon also comes with a Subatomic Deflector Array. The Deflector enables the ability to fire a Subatomic Disruptor. This devastating weapon fires a single massive sustained beam capable of breaking apart a target's molecular structure. This craft's primary mission appears to have been to bring starships and personnel out of time back into their own time frame without the need for a larger vessel, such the Wells Temporal Science Vessel.

A more advanced craft than other Starfleet based shuttles, the Danube is capable of longer-ranged away missions and transportation. It has higher warp capability and is capable of defending itself if needed. Such Runabouts are fitted as standard on Federation space stations (such as Deep Space 9) and outlying outposts.

While appearing almost identical to the Federation Danube Runabout, the Mirror variant is geared more for combat. The Terran Empire has seen fit to equip this small craft with a second Tactical console at the expense of a Science console.

An upgrade variant of the Danube, the Yellowstone is capable of longer-ranged away missions and transportation like the Danube, but it also comes with a Tetryon-Plasma engine, which can be ejected to create an hazardous effect in an area of space behind the Runabout much like Warp Plasma ejection from starships.

An advanced Runabout-esque craft, the Captain's Yacht is fitted as standard on Starfleet's larger vessels, such as the Sovereign-class Assault Cruiser. It has all the capabilities of a standard Runabout, but is designed to be the Captain's personal craft in dire needs.

A long-time use by Starfleet, these small attack fighters have primarily been used as support fighters in battles tracing back to the Dominion War. These ships are purely designed for combat roles and are incapable of long-range transportation, although they are Warp-Capable.

Handed to Starfleet in conjuncture with the Caitian Atrox Carrier, the Stalker Fighter is designed for the same-type of combat roles as the Peregrine Attack Fighter. It is capable of masking its energy signature more than other smaller craft, making it difficult to detect.

Standard Shuttlecraft fitted on most Klingon-designed vessels and stations, the Kivra is mainly used for transportation of personnel. It is capable of performing other tasks as well in dire needs. It is extremely lightly armed and is incapable at defending itself at all well in combat situations.

A more aggressive design than the Kivra, the Toron is more capable at combat situations and is better equipped at long-range transportation. This small craft is fitted as standard on Klingon-designed vessels and space stations.

A more advanced combat craft, the DujHod Chariot is fitted as standard on the Klingon Defence Force's larger Klingon-designed vessels. It is capable in combat situations and is better at surviving in battle. It is primarily designed to be the Captain's personal craft in combat situations as well.

Fitted as standard on large KDF Carriers such as the Vo'Quv Carrier, the To'Duj is only designed for combat roles and is a very capable support craft in battles. It is small and fragile, but is highly capable of exploting weaknessess in enemy vessels should the oppertunity present itself.

The Rozhenko Timeships appear to have only become available after it drifted through the Azure Nebula spacial rift. The Rozhenko also comes with a Subatomic Deflector Array. The Deflector enables the ability to fire a Subatomic Disruptor. This devastating weapon fires a single massive sustained beam capable of breaking apart a target's molecular structure. This craft's primary mission appears to have been to bring starships and personnel out of time back into their own time frame without the need for a larger vessel, such the Korath Temporal Science Vessel. 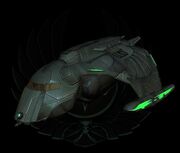 Standard Shuttlecraft fitted on most Romulan Republic vessels, the Tiercel is mainly used for transportation of personnel. It is capable of performing other tasks as well in dire needs. 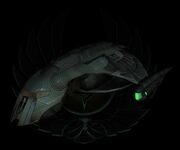 A more advanced craft than other Starfleet based shuttles, the Kestrel is capable of longer-ranged away missions and transportation. It has higher warp capability and is capable of defending itself if needed. Such Runabouts are fitted as standard on Romulan Republic space stations and outlying outposts.

An older Romulan designed ship, this vessel has been used a small Science Vessels and scout ships for the Romulan Star Empire. The Romulan Republic has now adopted these vessels, vessels which have a variety of roles.

First seen on the I.R.W. Scimitar, the Scorpion Fighter is completely designed for combat roles and for supporting larger vessels in engagements. It is equipped with a Romulan Battle Cloaking Device, making it a difficult enemy to bring down in an engagement, but it can be easily destroyed due to its small size. 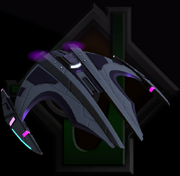 Jem'Hadar Fighters are lightweight and easily replaceable ships originally considered by the Dominion as only a small step above replaceable drones. They serve effectively as short-range attack craft, when supported by larger ships with hangar bays. Its innate stats are nearly identical to the Federation Peregrine.

A standard Ferengi shuttlecraft, the Na'Far is mainly used for transporting Ferengi personnel and goods to outlying outposts. It is equipped with a Metaphasic Shield Array designed for shuttle-type craft, granting it immunity to all shield and hull damage for a short period at the cost of speed and turn-rate.

Small Tholian-designed attack fighters, the Widow is designed for combat only and supporting larger Tholian vessels in combat. The Widow is equipped with a shuttle version of the Thermionic Torpedoes used on Tholians vessels, which drains weapon and engine power from the target it impacts.

A Voth designed heavy fighter which is designed for combat roles in supporting larger vessels in engagements, the Voth Heavy Fighter is one of the more durable and survivable fighters avaialble. As a result, this Fighter cannot equip Dual Cannons.

Shuttle weapons and components are recognizable by the "-S" (for "Shuttle") after the Standard Issue or Mark notation and are only meant for use on small craft.

Shuttles and other auxiliary craft come pre-equipped with special shuttle equipment that scales with the player. Rather than gaining discreet bonuses as with mark numbered items, the bonuses attributed to these items increase linearly with the player's level. For instance, a basic shield array gains 5% capacity for every mark number, but a shuttle shield array gains 1% for each level of the player. This means that a [Shield Array Mark X] on a shuttle would have an extra capacity of 50% (1,875 in a basic shuttle), but a [Shield Array Standard Issue-S] owned by a Vice Admiral level player (level 51) would gain a bonus capacity of 51% (1,888 in a basic shuttle).

These can reside in the inventory, but cannot be used while in a shuttle.