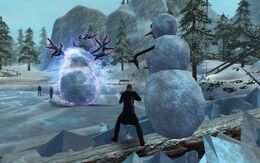 The Snowman Overlord is the leader of the Snowmen of Q's Snow Monsters who reside in Q's Winter Wonderland.