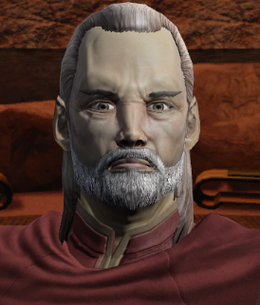 Ambassador Sokketh was a diplomat from Vulcan, who was known to spend much time off-world. One of his closest aides was diplomat T'Pela. The ambassador was murdered in his home, though his remains were only found several months after his death.

Sokketh was killed and replaced by an Undine imposter. During the following months, the Undine did not blend in well with Vulcan society. Many of Sokketh's colleagues, High Priest Savin among them, were uncomfortable with his new bad temper. The ambassador even refused to use transporter technology, likely to avoid unnecessary scanning procedures.

Despite his irrational behavior, Sokketh's true identity was only found out when his home was searched by Vulcan authorities in 2409. His long-dead body was found and evidence suggested that he was murdered by an energy blast. At that time the Undine was at the monastery of P'Jem, where he was escorted by Starfleet officers. Curiously, Klingon intelligence was already aware that Sokketh was not who he claimed to be.

The imposter likely died when the Undine Ship in orbit of P'Jem was destroyed by Starfleet forces.