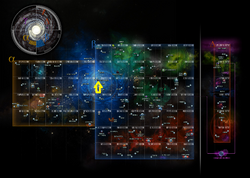 The Sol System (or Solar system or Terran system) is a star system located in the Vulcan Sector, and marks the border between the Alpha and Beta Quadrant[1]. It is home to the Human homeworld, Earth. Earth Spacedock orbits this planet and is the starting location for all new Federation characters. Starfleet Academy is based in San Francisco, Earth. Of the other worlds in the system, at least Mars and Luna have permanent settlements. The division between Alpha and Beta Quadrant runs through the Sol System.

A system with eight planets orbiting a G-class star, Sol is the heart of the Federation. Starfleet Command is located on Earth, the system's third planet, as is the seat of Federation government. The system is also home to Earth Spacedock and the Utopia Planitia Fleet Yards on Mars.

Of the eight planets, two can be visited ingame: Earth and Mars. The latter has two moons, Earth only one. The remaining six planets and the dwarf planet Pluto are visible from sector space.