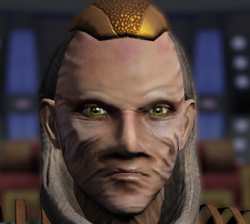 The Son'a are an interstellar power, originating from the Ba'ku planet. They are nomadic, though they maintain outposts throughout the Alpha and Beta Quadrant. By 2410, Son'a remain in command of at least one facility in the Briar Patch and have close diplomatic ties with the Dominion.

The Son'a were originally Ba'ku, living on the idyllic Ba'ku home planet in the Briar Patch. In the late 23rd century a group of Ba'ku, who desired to follow the way of the offlanders, attempted to take over the planet, but failed and were exiled.

In 2375, a group of Son'a conspired to retake the Ba'ku homeworld, but their plans were thwarted by the crew of the Enterprise-E.

During the Dominion War, Son'a sided with the Dominion and manufactured large quantities of the narcotic ketracel-white in the outlying areas near Cardassia and the Bajoran wormhole. After the war had ended, Son'a remained in contact with the Dominion.

Since the days of the infamous Briar Patch Incident, the Son'a have earned the reputation as being outcasts of the Alpha Quadrant. Despite this reputation, Son'a remained at the forefront of medical technology, as well as being in possession of incredibly powerful sensor and energy absorption knowledge. Using these advancements on their vessels made them formidable foes, capable of outmaneuvering and debilitating most of their enemies.

By 2410, Son'a remain in control of at least one facility in the Briar Patch.

The Son'a equip their vessels with photon torpedo launchers and isolytic subspace weaponry, in defiance of the Second Khitomer Accord. Isolytic Plasma Weaponry has a chance of dealing additional plasma damage to the target and creating rifts which pull foes towards the target hit.