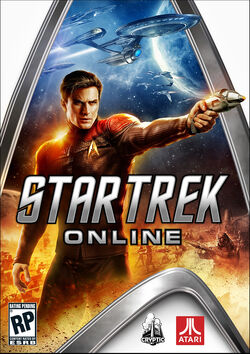 Star Trek Online begins 30 years after the events of Star Trek: Nemesis and 22 years after the destruction of Romulus (seen in Star Trek (2009). The year is 2409 and the infiltration by the Undine (Species 8472) has led to a new war between the Federation and the Klingon Empire, and a Romulan Republic (under Spock's protege D'Tan) has broken away from the remnants of the Romulan Star Empire (under Empress Sela). The game covers characters, locations and events from all series and films, including the latest releases such as Star Trek: Picard.

For information on how to get started, see the links on the wiki's main page.

Gameplay revolves around playing a character of desired faction in an open world, with various locations and elements from the Star Trek universe. It features a combination of space, where you take control of a starship, and ground portion of the game, where you control an avatar from the first or third person view. Game starts with a character customization, and a tutorial which introduces player with basic mechanics and available game formats, such as PvE (episodic storyline, PvE Queues), PvP and other content slowly unlocked with leveling.

The launch of Star Trek Online for Microsoft Windows occurred on February 2, 2010. Players who pre-ordered had early access, called Head Start, which began January 29, 2010. The launch build was temporarily revived on April 1, 2015, known as Star Trek Online: Rebirth, allowing players to experience the game as it originally existed.

Star Trek Online was originally being developed by Perpetual Entertainment, but in January 2008 the company announced it would no longer be developing the game and the license and content was transferred to Cryptic Studios, while the game was being published by Atari Interactive and Namco Bandai.

After Perfect World acquired Cryptic, it was announced on August 31, 2011 that they would be offering Star Trek Online in a free-to-play model in addition to its subscription option. The details of such a system, with free silver accounts and paying gold accounts, were announced September 6. The free-to-play service launched on January 17, 2012. By July 2012, Star Trek Online was the top performing game for Perfect World North America [2].

As of March 1, 2017, Star Trek Online no longer[3] supports Windows XP and Direct3D 9, or Video Cards with a Direct3D Hardware Feature Level less than 10.0. To ensure a smooth gaming experience, it is recommend that the following specifications are met:

The logo of Legacy of Romulus

In Star Trek Online, major updates/patches are called seasons in reference to the television show. Season numbering has remained consistent between PC and Console releases, despite seasons 1-11 being released at launch for console. The largest updates have been called expansions, which to date include;

Since Victory is Life, the game has focused on releasing expansions overtime with thematicly-linked seasons.

For the 4th Anniversary of Star Trek Online, additional statistics were released[5]:

For the 5th Anniversary of Star Trek Online, additional statistics were released[6]: