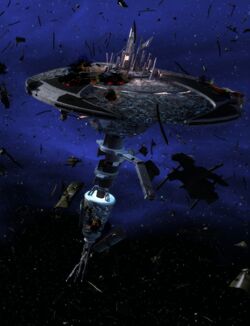 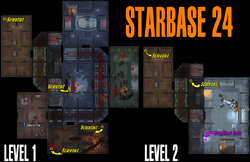 You may be looking for the fleet action of the same name, “Starbase 24”.

Starbase 24 is a Federation starbase in the Orion Sector. This station is under attack by the Klingons and is the subject of a low-level Federation Fleet Action to rid the area of the aggressors. There are many important scientists aboard the station when it comes under attack. The U.S.S. McCoy was a part of the Starfleet task force sent to relieve the defenders of the starbase.

One of the closest starbases to the neutral zone between Federation and Klingon Empire space, Starbase 24 is essential to Starfleet's war plans. A research team on the station is developing new weapons, and the station's staff is busy around the clock treating wounded and repairing battle-damaged ships. The station was where survivors of the Khitomer Massacre were taken in 2346, and it still holds a historical archive of records and artifacts related to the event.