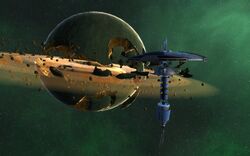 Starbase 39, or Starbase 39-Sierra, is a Starfleet station located in the Sierra System close to the Romulan Neutral Zone. It provides players access to the Bank, Mail, and Exchange.

Starbase 39-Sierra serves as an important Federation starbase near the Romulan Neutral Zone since at least 2270. Over the past decades the starbase played a major role in Federation-Romulan relations and served as an intelligence base for Starfleet. The starbase was also the hub for rescue and relief efforts after the destruction of Romulus by the Hobus supernova in 2387, and the years that followed. As of 2409, it is commanded by Admiral T'nae, and the primary base of Starfleet operations close to Romulan space.