Starship Mastery is a form of leveling progression tied to a specific tier 5-U or 6 playable starship. 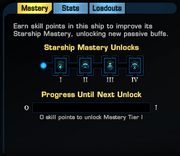 Levels 1 through to 4 are a linear tree of 4 successively unlocked passive bonuses tied to the specific ship. In essence, achieving a higher level of mastery on a specific ship increases the stats of said ship. This mastery does not carry over to other characters on the same account who also have that ship. Each starship type, e.g., Science Vessels, Warbirds, Birds-of-Prey, has the same level I-IV unlocks, which will therefore be geared more towards defensive, supportive, or offensive bonuses.

These levels are available to all Tier 5-U and Tier 6 ships. Most tier 5 ships can be upgraded to tier 5-U with a Starship Upgrade Requisition, which unlocks the ship's Mastery tree, albeit without the final trait. Some ships (such as low-tier ships, and one-time freebies, like the Obelisk Carrier) can't be upgraded to T5-U. Lobi, Lockbox, Promotional, and Event ships (such as the Sarr Theln) can all be upgraded to T5-U for free. By being upgraded to T5-U, they gain an extra console, more health, and the level I-IV Mastery bonuses.

A fifth level is present on non-fleet Tier 6 ships. This level, when completed, unlocks a starship trait for that character, which can then be slotted regardless of the ship being used by the player. This trait is not tied to the ship itself once obtained, and will only take effect if you slot it.

There are currently two different versions of Level 6 mastery, both of which have an account-wide effect. The sixth tier only needs to be reached once; while other characters flying the ship will be able to earn Starship Mastery toward level 6 again, this is just for show.

Here's a table listing each package, which links to sections below, and the type of starships it can be found on, which link to that article.

Found on Cruisers, the Cruiser Mastery Package is completely defense-focused.

Found on Juggernauts, the Juggernaut Mastery Package is primarily offense-focused, and similar to the Escort package.

These mastery packages are found on starships with the Raider Flanking passive ability, all containing Enhanced Weapon Banks and Precise Weapon Systems.

Found on Frigates, the Frigate Mastery Package is evenly split between offense and defense.

Found on Birds-of-Prey and other Raiders, the Juggernaut Mastery Package is completely offense-focused, and similar to the Escort package.

Carriers come in five different varieties, all having 2 hangar bays and three of them (Engineering, Science and Tactical) having Quick Deployment, Armored Hull and Advanced Shield Systems as their first, second, and fourth Mastery unlocks. The fourth, Flight Deck Carriers, were previously single-hangar starships and retain their more Cruiser-like Mastery Packages. See also the Romulan Carrier package below.

Found on Science Carriers. In Cryptic's Star Trek Online blogs, this package is referred to simply as "Carrier".

The following mastery packages can only be found on Romulan warbirds with Singularity Cores. They are similar to existing packages, with one of the unlocks replaced with Enhanced Singularity Circuitry.

Found on Warbird Battlecruisers, the Engineering Warbird Mastery Package is similar to the Cruiser package (sans the Rapid Repairs) and primarily defense-focused.

Similar to the Science Carrier package (sans the Advanced Shield Systems), this mastery package is found on Science Carrier Wabirds. In Cryptic's Star Trek Online blogs, this package has also been referred to simply as "Carrier".