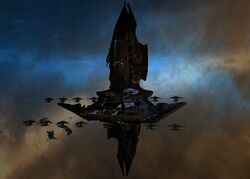 Station Alpha, also known as the Elachi Base, is the staging ground of the Elachi invasion of the Romulan Republic. The station was constructed in subspace and nearing completion in 2409. It is overseen by the Elachi Station Commander and numerous Elachi staff. Station Alpha contains at least three incubation rooms used to generate Elachi soldiers from captured Romulan and Reman victims.