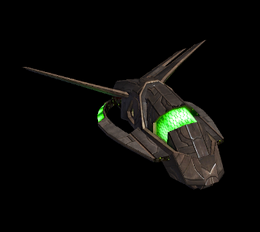 The Stinger Fighter (previously known as the Raider Fighter) is a small lightweight fighter vessel of Nausicaan design. They rarely operate independently; usually they are launched from Talon Battleships to assist in battle.

Although their shields and hull are low compared to major starships Stingers can inflict significant damage over time. They are equipped with Disruptor Turrets and Photon Torpedo Launchers and display no abilities.

More recently stingers will emit a beam (name unknown) that will disable starship engines and thrusters locking it into a drift. This does not show in the buff/debuff bar so it is unknown what to call the ability.