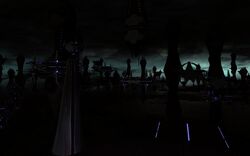 Storage Facility Z98 is a Solanae outpost located in subspace. Its primary purpose is to supply and transport servitor troops of the Iconians across the galaxy, though it also functions as a control center for the extensive Iconian gateway network. The facility also provides access to an Iconian database, which contains information regarding the Iconians' plans for the Milky Way.

Facility Z98 is largely automated, though it does possess examination rooms for Solanae to experiment on test subjects, as well as docked ships such as Obelisk 1.

Ideal site for harvesting. Servitor races have used disease epidemics and internal conflicts in ancient past to gather specimens for study.

Population is numerous but mostly peaceful. Poor candidates for servitor status: High creativity levels and self-preservation instinct make them inclined to fight rather than submit when faced by overwhelming foe. See "Borg" for more information.

Can be aggressive when threatened. Recommend that all activities in system be covert until invasion is launched.

Target for extermination. If Sol system is eliminated, models show that political entity known as "Federation" may collapse.

Aggressive, warlike species that dominates this area of space. Strong tendencies to fight rather than submit. Harvesting programs in past have been problematic -- only successful when used in concert with internal conflict.

Possible candidate for servitor race, if key members of government and entity known as "Great Houses" could be used to direct rest of population.

Military structure in most organizations makes population already accustomed to taking orders from superiors. Recommend study of "honor" in society for use as a tool for control.

If population can be absorbed into servitor species, it would be a great addition to our fighting strength. If they cannot, extermination must be swift. We cannot give the Klingons a chance to organize against us.

Dominion scientists discovered an intact gateway 37 cycles ago, but it was destroyed by opposition forces before they could activate it.

There are other gateways in the region that remain inactive. Agents are in place to stop the Dominion from discovering the location of these gateways before they are prepared.

As to the Dominion themselves: we recommend observation but no engagement. The Dominion are organized and used to subjugating large numbers of species spread across a large area of space. When the Alpha and Beta Quadrants are firmly under our control then we will have the resources needed to conquer the Dominion as well.

Survivors of Romulan extermination have gathered on site of former Dewan homeworld. They have uncovered sites belonging to servitor races and are attempting to reactivate gateway. If gateway is successfully activated, they may threaten entire network.

Attempts to use Elachi to eliminate threat unsuccessful. Alliance with Tal Shiar problematic -- Romulans as a species show more self-determination and willpower than in previous observations. Leader known as Sela must be controlled or eliminated.

Several key members of Romulan Republic gateway research team have been taken for additional study without their knowledge. Brain scans of Researcher A'dranna have yielded vital information about project.

Agents have used that information to destabilize gateway. If activated, seismic instability will affect entire planet. Expected outcome is 70 percent reduction in population.

Remaining survivors must not be allowed to form organized groups -- recommend subsuming them into Elachi as soon as possible.

The homeworld is still unsuitable for habitation, although servitor races have begun subspace modifications in preparation for invasion.

When quadrant is pacified, we will use forced labor to terraform world for our return. All must be as it was.

Safety Measure Theta Six in effect due to gateway instability.

All space gateways for large ship movements have been withdrawn into subspace until network instability is addressed or proper activation codes are transmitted.

Use of radioactive mines to infect ship crews and bring them to Quarra is interesting, but ultimately inefficient. We would require greater amounts of loyal servitors to pacify Delta Quadrant than this method would provide.

Recommend cooperation and eventual inclusion as a servitor race. In exchange for their loyalty and detailed information on their indoctrination technique, we will alleviate their manpower problem.