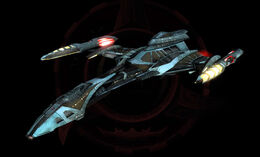 The SuQob-class Raptor is a Tier 3 (Level 20) Raptor which may be flown by Klingon Defense Force characters, including Klingon Empire-aligned Romulan Republic and Dominion characters. All faction restrictions of this starship can be removed by having a level 65 KDF character or by purchasing the Cross Faction Flying unlock from the Zen Store.

The Qorgh-class Raptor that has served the Klingon Empire so well in battle has been updated with new technology for the 25th century battlefield. The result of this upgrades is the new SuQoB-class Raptor.

The SuQob-class Raptor has a cloak that allows the ship to cloak when not in combat, granting stealth and a damage bonus upon decloaking.

11
+5 ENG and SCI from AnyShip
Community content is available under CC BY-NC-SA 3.0 unless otherwise noted.
Advertisement