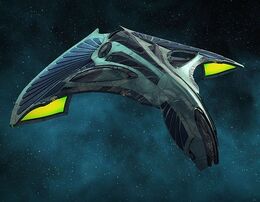 The Sui'Mor-class Temporal Science Vessel is a Tier 6 Science Vessel which may be flown by Romulan Republic characters. All faction restrictions of this starship can be removed by having a level 65 KDF character or by purchasing the Cross Faction Flying unlock from the Zen Store. This starship can be used from any level upon completion of the tutorial experience. As you level up, this ship gains additional hull, weapon slots, and console slots.

Players can obtain this starship as a ultra rare drop from the [Infinity Lock Box]; it comes in an [Infinity Prize Pack - T6 Ship] choice package, which is bound to you until a ship is chosen. The boxed ship is not bound and so may be traded to other players or bought and sold on the Exchange for energy credits under the name [Special Requisition Pack - Temporal Science Vessel [T6]]. The choice box's contents depend on the player's faction; Romulan Republic players will receive the Sui'Mor Temporal Science Vessel when opening it.

Tholian asteroid bases in the Azure Nebula still churn with activity, capturing numerous vessels from different timelines and salvaging their stolen technology. Fleets aligned with the Federation, the Klingon Defense Force, and the Romulan Republic have each been working against these Tholian captors, rescuing any vessels that they can from Tholian webs.

Recently, a new series of ships have been rescued from the clutches of the Tholians – Science Vessels and Destroyers that appear to be Romulan ships from the 29th century. As more of these ships are reclaimed, the Ferengi Lobi Crystal Consortium has been repairing and refitting them for use in modern-day warfare – and then selling them for a modest fee.

Among the ships that have been recovered was the Sui'Mor-class Temporal Science Vessel, a successor to the previously discovered R'Mor-class vessel. The Romulan Republic's interest in these vessels cannot be understated. Unfortunately, much of the 29th century technology is missing from these ships – presumably stripped and now in the hands of the Tholian Assembly. Still, much can be learned from these vessels, and a few have been rebuilt with conventional equipment that takes advantage of some of these ships' secrets. With its future origins, the Sui'Mor class bears a noticeably different appearance to other Romulan ships, but is still recognizable as being of Romulan heritage.

This ability is part of the Temporal Fragmentation System Set, which also includes [Console - Universal - Enhanced Manheim Device] and [Console - Universal - Temporal Distortions] obtainable with Tal'aura Temporal Destroyer (T6) and Paradox Temporal Dreadnought (T6), but also equippable on the Sui'Mor Temporal Science Vessel. For each console added after the first, an additional passive bonus is unlocked.

By using an [Experimental Ship Upgrade Token], the Sui'Mor-class Temporal Science Vessel may be upgraded to T6-X, unlocking an extra ship device slot, universal console slot, and the ability to slot an extra starship trait.