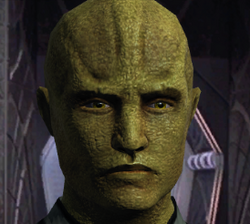 Suliban cell ships are small, but can link together forming large helical stations

The Suliban are a neutral humanoid species with distinctive scale-like green skin and generally hairless heads. A nomadic race, they are known to employ space helixes and cell ships.

In the 22nd Century, the Suliban Cabal were used as a proxy-power by a faction of the Temporal Cold War. Outfitted with superior genetic engineering, some Suliban were ordered to destabilize the Klingon Empire, but also to assist the Enterprise (NX-01) during the Xindi crisis.

The Suliban homeworld became uninhabitable in the 19th century, which led to Suliban adopting a more nomadic lifestyle. Suliban started constructing Helixes, large stations that could support up to 3,000 people. One such Helix was built in the Japori Sector.

By 2151, some Suliban came in contact with an unknown figure from the future who pulled them into Temporal Cold War. In exchange for their service, this mysterious individual offered genetic enhancements and advanced technology. These Suliban formed the Cabal, a terrorist organization tasked with destabilizing various powers of the Alpha and Beta Quadrants, such as Klingon Empire and Tandarans.

Suliban Cabal came in contact with the United Earth for the first time, when the NX-01 Enterprise prevented them from stopping a Klingon officer who was delivering crucial information about Cabal activities to the High Council. The Cabal continued crossing paths with NX-01 and her crew. At one point, Cabal framed the Enterprise for the destruction of a colony on Paraagan II.

Soon after, Cabal attempted to capture an Earth vessel from the 31st century, which in fact belonged to Kal Dano. They fought against Tholians, Vulcans and Enterprise, but failed when the Enterprise activated a temporal beacon which sent the vessel back into the future.

In 2153, following a devastating attack on Earth that killed several million people, Cabal brought Jonathan Archer to a temporal chamber where the mysterious figure revealed that the Xindi were behind the attack.

After the Xindi crisis was resolved, mysterious benefactor dispatched Silik, a Cabal agent, to travel to the 20th century and bring back specifications for a temporal conduit which he could use to physically travel through time, instead of just communicate. Silik failed to bring back the specifications, but helped Jonathan Archer and his crew in preventing the Na'kuhl and bringing an end to the Temporal Cold War.

Not much is known about the Suliban after the Temporal Cold War has ended. By 2409, Suliban Cabal was long gone and its Helixes were used by Suliban nomads looking for shelter and parts.

By 2410, newly-formed Romulan Republic reached out to Suliban survivors, eventually working together on building a hybrid vessel based on original Suliban designs.

After the Cabal was stopped, Suliban were forced to surrender their fleet. As a result, their vessels have been stripped of all advanced technology and weaponry. The remaining cell ships are used as freighters, tasked with supplying Suliban Helixes and refugee camps.