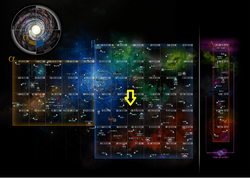 The Suliban Helix System is a system located in the Japori Sector of the Beta Quadrant.

This system contains the remnants of a massive space station once used by the Suliban Cabal. Abandoned in the mid 22nd century, the helix was once made up of hundreds of cell ships around a central core and was capable of housing at least 3,000 people.

Only a few depowered cell ships remain at this location, which has become little more than a historical curiosity.