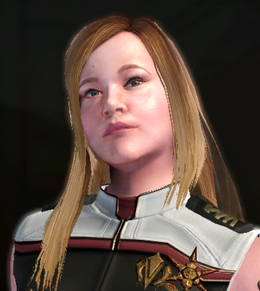 For for her DSC Starfleet counterpart, see Sylvia Tilly.

Captain Sylvia Tilly (also known as "Captain Killy") is a Terran Captain and the Mirror Universe counterpart of Cadet Sylvia Tilly. In 2256, Tilly was in command of the I.S.S. Discovery. When the U.S.S. Discovery jumped into the Mirror universe using the spore hub drive, Tilly, her ship and her crew were thrown into the 25th century of the Prime universe where she remains at large.

In 2411, Tilly commands the I.S.S. Enterprise after Admiral Leeta returns to the Prime universe to warn the Alliance about the Terran Empire's plans. Captain Kuumaarke is known to be her loyal 'pet', Marshal Janeway finds her to be a problem and she is constantly in conflict with the Inquisitor due to an assassination attempt she tried to perform which led to the latter's vocal cords lost.

Similar to her Prime universe counterpart, Sylvia Tilly was aboard a Malachowski-class vessel during a training cruise when the ship's captain was killed. Tilly took the opportunity of the created vacuum in leadership to seize command of the ship. She also killed the ship's First Officer (a Mirror universe counterpart of the player). According to other Terran captains such as Evelyn Savea, Tilly murdered the First Officer with a spoon. ( “Pahvo Dissension”) According to Tilly herself, the death was swift and painless. ( “Para Pacem”)

Some time later, she would take command of the I.S.S. Discovery while the previous captain was in bed with the flu. (Despite Yourself) In her career, she participated in attacks on Betazed and Mintaka III with Emperor Georgiou. Her reputation earned her various nicknames, including "The Slayer of Sorna Prime," "The Witch of Wurna Minor," and "Captain Killy." (Will You Take My Hand?, Despite Yourself)

Upon their arrival, an Alliance vessel was present in orbit of the planet. Tilly enlisted ship's aid by claiming asylum and used them to fight off the Klingon attackers as well as her own mutineers who objected to seeking aid from the Alliance. During the ensuing battle with Klingon forces, Tilly beamed down to Pahvo and managed to manipulate it with agonizer technology into aiding her. Having turned the planet into a weapon under her control she destroyed the Klingon attackers and damaged the Alliance ship, giving them a warning to stay away and stating her intent to use Pahvo to create a new empire under her control. ( “Para Pacem”)

The Alliance vessel eventually returned to the planet and its crew managed to disable the agonizer technology. However, Tilly managed to escape using the planet's transmitter as a long range transporter. Her crew, having been abandoned by her, agreed to return to the 23rd century where they would eventually be destroyed by Klingon forces. The remnants of the I.S.S. Discovery would be mistaken by Starfleet as wreckage of the U.S.S. Discovery. ( “Illusion of Communication”, The War Without, The War Within)

In 2411, it is revealed that Tilly, claiming to have killed the player’s mirror self, also known as the Inquisitor, was lying as they appear onboard the I.S.S. Reskava. Her assassination attempt, however, had led to their vocal cords lost and replaced with a vocalizer. With Admiral Leeta having returned to the Prime universe, Tilly takes command of the I.S.S. Enterprise and is part of a team alongside Captain Kuumaarke and Marshal Janeway to attack Jupiter Station to steal the Emperor’s prize. During the mission, she and the Inquisitor are in constant conflict due to the former’s assassination attempt while Marshal Janeway finds her to be an insolence. Tilly also expresses curiosity over the Inquisitor’s role in their mission when the latter confirms that they work for the Emperor. Despite their conflicts, they agreed with each other and, along with Kuumarke, betrayed Marshal Janeway and kept the Emperor’s prize for themselves. ( “Firewall”, “Red Shift”)