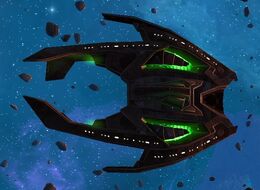 The Syphon Frigate is a frigate class used by the Nausicaans. The vertically oriented ship is capable of launching a Power Siphon Drone, which leeches power from its selected target. As usual for frigates, the Syphons come in group of threes. It is the smallest senior ship in the Nausicaan fleet, outgunned by a Destroyer Escort but superior to a Stinger.