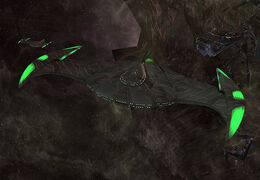 This is about the NPC vessel. For other uses, see Light Warbird.

The T'varo Light Warbird is a frigate class used by the various Romulan and Reman factions, and an upgrade of the warbird design used during the 22nd Century. Though fairly weak compared to other warbirds, they can be deadly in teams in two or three. A common tactic used by these warbirds is to cloak all but one vessel in a squadron, in order to lure in an enemy for a surprise attack.