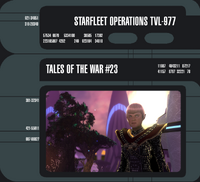 After some unavoidable small talk Sela began to withdraw from the conversation. "Don't make eye contact," she recalled her father's advice with a twinge, "wear a neutral expression. Listen. Always listen." His advice had served her well in the Tal Shiar and it worked now. She began to meander through the growing crowd towards the nearest exit, the neutral mask and unobtrusive wandering as effective as any cloaking device. Excited and relieved chatter filled the air. It grated against her ears. Their worlds had all been saved by the miraculous journey through time. Sela gritted her teeth.

Sela knew the opportune moment would come if she was patient. She didn’t have to wait long. A Klingon contingent beamed down with casks of bloodwine to toast the victory with Kagran. Klingons rarely celebrated at less than full volume and the flood of jubilant warriors quickly overwhelmed the more subdued Federation and Romulan officers.

The Academy grounds were well marked for the students. Sela followed the signs and ducked into the faculty locker room outside a holodeck suite. The replicator could be used to create alternate clothing, but it would be logged, so it wasn't an option. The lockers weren't actually secured, giving her a selection of alternative clothing. She opened a few looking for something suitable. Sela paused over a security officer's mustard uniform then, shaking her head, opened another locker. There was a set of off-duty clothes that might be slightly too large, but they were a soft pastel purple that reminded her of Iconia. Sela sneered and put the garment down. She didn't wish to be in something so eye-catching and cheerful. The next locker had darker robes in the Vulcan style. The austere garment even had a hood. Perfect. She traded her overcoat for the concealing robes and pulled up the hood.

For the moment, the rest of the galaxy seemed content to let her be and enjoy the shared victory. Soon all her actions would be remembered and there would be a call for her to face the consequences. Probably from D’Tan’s traitors first, she thought with a scowl. The revelation on Iconia would erase whatever goodwill she’d gained by bringing in the Dominion. The same Dominion who had departed the sector and stranded her on Earth. She would pay them for that. She hunched into the robes as a gaggle of excited cadets passed by, shrinking from their eyes as much as their joyful laughter. Sela could not share the mood. Her scowl deepened.

Many people were leaving the Academy grounds and heading for the city across the bay. The transport she boarded was crowded, but her best Vulcan impression kept everyone at arm's length. The city was a riot of celebration when the transport deposited her and the other passengers in San Francisco proper.

Sela automatically took stock of her situation. She was alive and while she didn’t have access off world via the Dominion, her eleventh-hour save had bought her this momentary reprieve. She needed to find passage, rendezvous with loyalist forces and then perhaps she could spare a moment to truly consider the truly bizarre chain of events that had destroyed Romulus, and possibly-

“You did it!” The speaker was a human civilian embracing a Starfleet officer. The two looked enough alike they were probably sisters. Sela took a deep breath and then let it out. Nothing for her to be concerned about; just two survivors happy to be alive, another family reunited. Sela watched them for a brief moment and decided she was glad her father had not lived to see the destruction of his home world.

Previous experiences, beginning when she’d tactically retreated from Romulus before her first exile, told Sela she needed to get off the planet and soon. Her window of escape closed with every moment. The longer the delay, the harder it would be to leave no trace. Replacing her facade of Vulcan calm, Sela headed in the direction of the public spaceport.

Earth had been on lockdown with the battle raging overhead. The entire planet had been holding its breath in fear. Now the danger had passed and humanity breathed a collective sigh of relief. People streamed out from secured areas into the streets. The throngs of people made it easy to bump into someone and lift some latinum here, some jewelry there; enough to supplement what she already had on her person, for passage off world. No one would ever suspect an apparent Vulcan of something as illogical as theft.

Wherever Sela looked there was celebration. Humans made the majority but the other races were just as exuberant and welcome. It was the end of their nightmares, after all. Their burdens had vanished. Hers had not. Her burden of her own creation. As Sela crossed the city, with each step the knowledge seemed to weigh more. She tried to focus on the familiar motions of escape, but the terrible truth was a dark pressure on the edges of her thoughts.

How had T'Ket known she was a Romulan, anyway? Sela clenched a fist as she finally walked into the spaceport. Probably through Kagran when he was looking for the other ships and becoming best-buddies with the Iconians. Idiot. She'd remember that! She- Sela banished that line of thought and took a calming breath. She had to escape first.

The spaceport was alive with activity as travel restrictions were lifted. Captains who had been stuck on the surface fearfully awaiting death were now eager to resume trade. How easy it was for them to go back to their lives as if nothing had happened. Sela tucked away another scowl of anger. Her father’s household had acted like that after her mother’s execution. Forcing another calming breath, Sela began to inquire about passage off Earth.

Sela found a small Ferengi merchant ship headed in approximately the right direction. The owner, an odious example of the species named Qwig or Qwal or Qwen or something, didn't appear to be overly concerned with her lack of credentials or the strange collection of latinum and jewelry she presented in exchange for passage off world. Vulcans never caused problems and he was too happy to be alive to care much. Like many, he’d been stuck on Earth as the Iconian fleet pressed their attack and he was eager to return to his business. But not before he took advantage of the situation and stocked his vessel with goods and passengers. Sela shuffled into the ship after a Denobulan and a Bajoran and settled into the common area for the voyage. It was not as palatial as she would have preferred but it would be one of the first vessels leaving the Sol system.

As the small ship rose into the sky and clear blue gave way to fathomless black, Sela regarded the planet. It hung like a fragile blue jewel, far less green than Romulus had been. The ship tilted and they swept around crossing to the night side. Her father had taken her up for her first trip into space and had pointed out the grand features of their world. She’d been mesmerized by the lights of the cities, how they sparkled in the dark on the night side, adorning the planet like filigree. He’d told her Romulus was her birthright. Earth was covered in an unfamiliar lacework of light. She turned her head away.

Sela had saved Earth and the Federation. She had saved that idiot Kagran and his Empire and that traitor D'Tan and his weak followers. And in the process she had doomed Romulus.

"I never thought I'd live through all that," the Bajoran passenger said as he looked around at the aftermath of the battle and the clean-up process. "Did you see the size of some of their ships? And they could just appear! Bam! Just like that!"

Sela made an appropriately agreeing noise. She could see Alliance ships already carefully clearing away debris, towing damaged ships and beginning to make repairs. The damage would be erased and life would continue. In a short time it would be as if nothing had happened. The home world of Tasha Yar's people would continue while her father's world, Sela's world, would still be gone. And she had caused its downfall. Sela hid a grimace.

The Denobulan grinned the too-large smile and joined the conversation. "So, where are you headed anyway?" he asked.

She mentally kicked herself for the less-than Vulcan response but it shut the men up. Both eyed her then resumed their inane chatter with one another. Sela assumed what looked like a meditative pose and thought about her next steps. She had resources tucked away she could still call upon at need. Her presence in the successful final battle would be an asset so long as some of the more damning details never came to light. She would rebuild. She would survive.